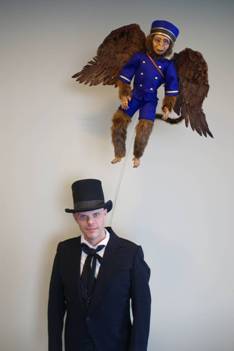 People living in Toronto, Montreal, Vancouver, Calgary and Edmonton will see something amazing in their cities this weekend! Do not be alarmed if you spot a life-size replica of one of the “Oz The Great and Powerful” high-flying characters. Street teams will be out and about and will consist of a lookalike of the Oscar Diggs character and a life-size model of Finley, a winged monkey that accompanies Oscar on his journey to the Land of Oz. The street team will be on hand to interact with movie fans, showing images and clips from the film and distributing prizes and collector items, all in promotion of the March 8th release of the film.  Can not wait for this release!!

Passersby who spot the Finley lookalike in their city this Saturday, March 2nd can also take a photo and tweet it using the hashtags #FlyingMonkey and #Oz for a chance to win an “Oz The Great and Powerful” prize pack.

If you spot a character let me know! I would love to see all your photos!

Disney’s fantastical adventure “Oz The Great and Powerful,” directed by Sam Raimi, imagines the origins of L. Frank Baum’s beloved wizard character. When Oscar Diggs (James Franco), a small-time circus magician with dubious ethics, is hurled away from dusty Kansas to the vibrant Land of Oz, he thinks he’s hit the jackpot—fame and fortune are his for the taking—that is until he meets three witches, Theodora (Mila Kunis), Evanora (Rachel Weisz) and Glinda (Michelle Williams), who are not convinced he is the great wizard everyone’s been expecting. Reluctantly drawn into the epic problems facing the Land of Oz and its inhabitants, Oscar must find out who is good and who is evil before it is too late. Putting his magical arts to use through illusion, ingenuity—and even a bit of wizardry—Oscar transforms himself not only into the great wizard but into a better man as well.
“Oz The Great and Powerful” is produced by Joe Roth, with screen story by Mitchell Kapner and screenplay by Mitchell Kapner and David Lindsay-Abaire. Grant Curtis, Palak Patel, Josh Donen and Philip Steuer are serving as executive producers. “Oz The Great and Powerful” opens in theatres on March 8, 2013.
Related Posts

Celebrating the Blog’s Birthday with a Twitter Party and More! #BloggersFete

Hunting Giants on Hwy 11 and other Northern Ontario Adventures

Sport Chek and Under Armour Launch Search for Youth Ambassadors